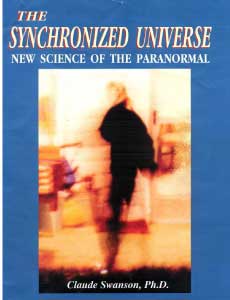 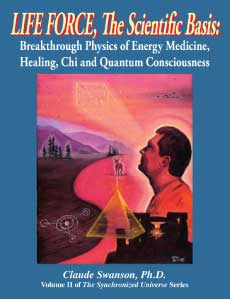 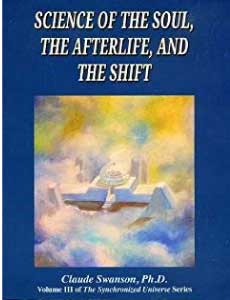 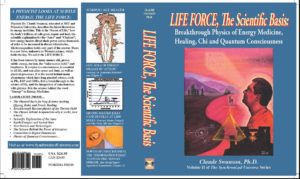 It is based on a new energy called “Torsion” discovered by Russian scientists a half century ago. So far it has been overlooked in Western science. This book is the most complete and comprehensive description in English of this important new energy. It is the key to a scientific understanding of consciousness, thought, and to the energies of life.

It describes the energy of Torsion, the basis of long distance energy healing, Chinese medicine, Reiki, Qi Gong and the secret energy that makes life and growth possible. Dr. Swanson’s book with over 700 pages, 2000 references and 400 figures is the most comprehensive description and explanation of this subject.

And the founder of the Subtle Energy society ISSSEEM, Dr. Elmer Green, said of it:

“IT IS ONE FOR THE AGES. I HIGHLY RECOMMEND IT.”

Dr. Swanson’s research reveals that 20th century science has overlooked an important force – the power of consciousness. It shows up in lab experiments as something called “Subtle Energy,” also called “chi” or “qi,” prana, orgone, ” bioenergy, or the “Life Force. It has been developed into a science by Russian scientists in the last several decades. They call it “Torsion.”

This energy serves as the bridge between the familiar phenomena of conventional Western physics and the more unusual and esoteric phenomena such as ESP, PK, teleportation, levitation, Remote Viewing and distant energy healing. This is illustrated in the diagram below. 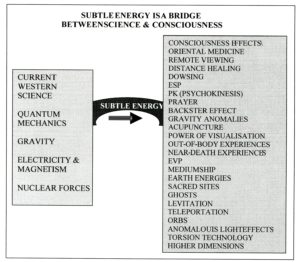 This energy affects space-time at the deepest level. As a result, it manifests in many different phenomena and for this reason has been called by many different names over the centuries. It is the basis for energy healing, shamanic practices, “mind over matter” or “PK,” and many other phenomena. For this reason, it is like the elephant in the parable of the six blind scientists: Each sees it in a different way depending on what they are testing: 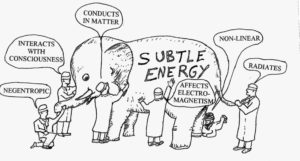 This is the energy used by energy healers, it is the energy projected by Chinese qi gong masters and Reiki healers. It is the basis for the powers of “mind over matter,” or psychokinesis. It is the energy which a Yogi builds up in his body through special breathing called pranayama, the concentration of prana.

Dr. Swanson’s research has focused on the nature of this energy – how healers create it and use it, how our laws of nature are altered by it. This energy is the key to a science of consciousness. It is also the key to many new forms of healing.

This energy is concentrated at “sacred sites” and megalithic formations, and is responsible for the unusual feelings and phenomena in crop circles and in Egyptian pyramids. The book “Life Force” discusses each of these cases and explains how they create their unique effects with torsion energy. 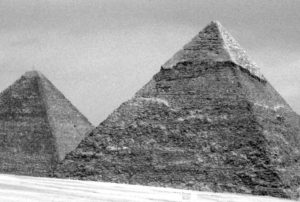 Specific shapes have an effect on subtle energy. This has been known within wisdom traditions and is used in the design of sacred sites, such as the pyramids of giza, shown here.

This energy was studied for over forty years in secret Russian programs, and was central to German military research before that. It is the key to new energy healing and paranormal phenomena, as well as breakthroughs in propulsion and energy.

It establishes the science and the physics which back up and explain many mysteries, including long distance healing, the nature of the Aura, ESP, PK, Teleportation and how shamanism creates instantaneous healing. It explains the scientific nature of “subtle energy,” also called “chi,” prana, and “orgone.” It is truly the missing “fifth force.”

Dr. Swanson’s book “Life Force, the Scientific Basis” explains how energy healers send their energy to a far away client. This is illustrated in the figure below: 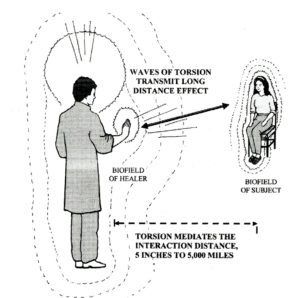 These effects can travel through barriers and even forward and backward in time. Devices are now being built and patented, and equations being developed which integrate this ancient and elusive force with modern science. One qigong master, Jixing Li, has selectively killed cancer cells in petri dishes 2,000 miles away, while sparing others inches from them, demonstrating the accuracy that is possible with this energy. Qigong master Dr. Yan Xin has projected his energy over thousands of miles to alter decay rates of radioactive materials, change the bonding structure of water, and bent laser beams under the watchful eyes of top Chinese physicists. 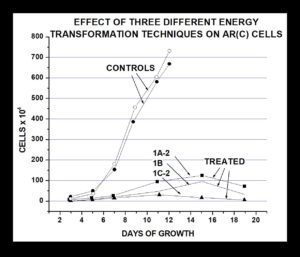 In other experiments, qi-gong master Dr. Yan Xin projects “chi” around a lecture hall. He raised the “count rate” of special detectors in the room by a factor of twenty just by pointing at them: 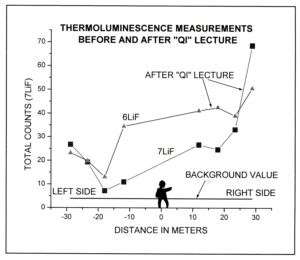 In other experiments qi-gong masters were shown to emit infrared radiation from their hands in controlled ways, completely unlike the emissions of non-qigong practitioners: 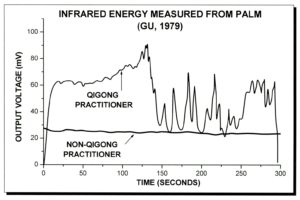 One of the most distinguished scientists in China is Dr. Qian Xuesen (Tsien Hsue-shen), famous in both the U.S. and China. He is the founder of the modern Chinese aerospace and rocket program, chairman of the Chinese Association of Science and Technology, and author of a standard textbook, Engineering Cybernetics. He is listed in Wikipedia as one of the founders of the Jet Propulsion Laboratory at the California Institute of Technology (Caltech), and was former Goddard professor there. In 2008 he was named Person of the Year by the American magazine Aviation Week and Space Technology.

After thoroughly studying the experiments conducted with Dr. Yan xin, he made the following statement:

“These experimental results (by Dr. Yan Xin and his coworkers) are a first in the world. They unequivocally demonstrate that without touching substances, the human body can affect them and change their molecular structures and properties…They are new scientific discoveries and the prelude to a scientific revolution.”

This shows that the “Life Force” energy is being recognized by top scientists for what it is: a genuine scientific revolution! The best and most complete description of this force in english is Dr. Swanson’s book: “Life Force, the Scientific Basis.” [>> LINK buy the book]

One example of this research: Chinese qi-gong masters were able to project this energy to alter the decay rate of radioactive materials hundreds of miles away, and on command: 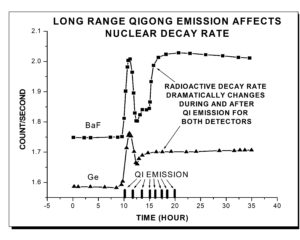 This energy has also been used in the United States to conduct precisely controlled remote healing experiments. In tests conducted by Prof. Joie Jones at the University of California, Irvine, cells in petrie dishes (shown below) were exposed to lethal levels of gamma radiation. 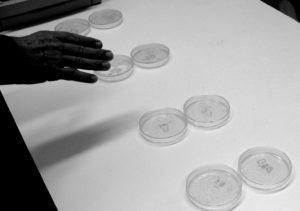 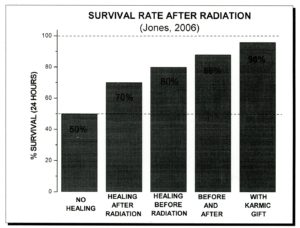 This unique healing energy explains many new discoveries in the science of life that were not recognized before in Western medicine: for example, the biophoton field and the aura are made of this Torsion energy, and it forms the “blueprint” or “template” for the body’s growth. This pattern instructs each cell in how to grow and specialize. These discoveries explain why Kirlian GDV cameras really do measure the aura, and how dark energy and dark matter, which have puzzled physics, can be explained as part of this “Life Force” or Torsion energy.

By comparing the extensive research of baron von Richenbach in Germany with Russian Torsion scientists, and with Wilhelm Reich in Germany and Callahan and Tiller in the U.S., a much deeper and more comprehensive understanding of this energy has been achieved. As one example, the forty year research program conducted by von Reichenbach in the 19th century identified many of the characteristics of torsion energy. In the figure below, it is being emitted by the finger of a “high sensitive,” and this causes a pendulum to swing. 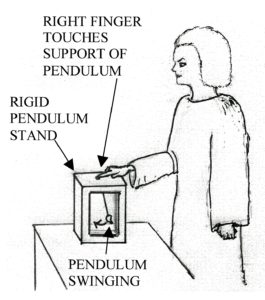 In the same way this unusual energy plays a central role in human metabolism and is responsible for creating the human aura. The figure below shows the aura of a healer measured by the “gdv” computerized system of aura measurement. The aura becomes much larger when the healer “powers up” to do his work. This energy surrounding him is torsion energy or “life force” energy, described in the book. 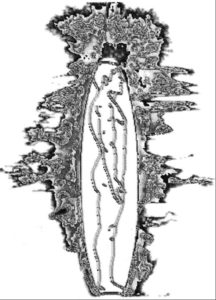 Von Reichenbach discovered that this energy occurs in two forms which are polar opposite. In Chinese medicine this is known as “yin” and “yang.” Von Reichenbach called them “negative” and “positive” od. Russian scientists call this “left” and “right” handed torsion. They have discovered that this energy arises because of changes in the spin properties of the space, and equations have been developed. The diagram below illustrates the origin of some of this force: 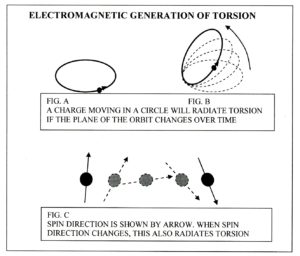 Torsion waves are created whenever the spin of a particle is changed. Torsion can be thought of as a “spin wave” which propagates through space. The top diagram in the figure depicts a circular orbit in which the plane of the orbit changes over time. Since the circular orbit defines a spin direction, perpendicular to the plane, it can also be represented as a change of spin direction with time.

The figure below illustrates how a healer transmits torsion energy over great distances and focuses it precisely on the desired target. This cannot be done with electromagnetic radiation, but only with torsion. Dr. Swanson’s book “life force” explains how this is done. 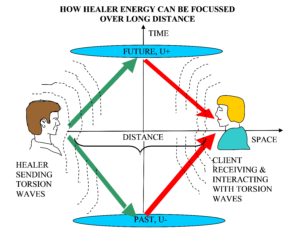 Below is a chart based on von Reichenbach’s measurements of the natural emission of this energy from elements in the periodic table. Knowledge of this type has been used to develop “psychotronic devices” which operate purely on torsion energy.

The periodic table of elements, with those found to be “od negative” and “od positive” distinguished. The “od negative” elements are all found to have high electronegativity and fall on the right hand side of the chart.

An example of a device based on this energy which was built and patented by russian scientists is shown in the figure below. 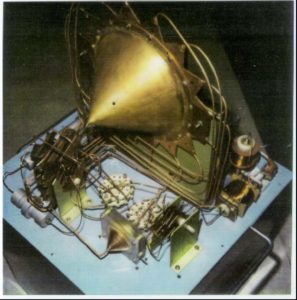 This energy is used by the body for efficient metabolism becomes clear. Its use in sacred sites to generate unique spiritual environments, and the higher dimensional aspects of subtle energy in music, fragrance, emotion, and the power of shape and sound (yantra and mantra) are explored. The book develops a new “science of consciousness” as it explores these various aspects of subtle energy and the way they connect our awareness to higher dimensional consciousness and contact with spirit.